Welcome to Strummers Music
About Strummers
Meet the Team

Strummers Music launched on 30 January 2016. In January 2018 we celebrated our second anniversary in January 2018 with some of our favourite 'political songwriters' including John Preston, Liz Cotton, Tony Phillips and Major Rat Run.

Prior our launch, Strummers existed as a community venture putting on occasional gigs and supporting up-and-coming young music acts.

Strummers Music builds on the underground music scene in Cambridge, including Cluzion Music, the Plough and Fleece music session and the "Strummers and Dreamers" radio show on Cambridge 105.

At Strummers, we believe that live music enriches the community. We aim to support local talent, as well as exciting performers from these isles and beyond and running Open Stages.

We aim to foster close links with other folk and acoustic clubs in Cambridge - no man is an island. We believe that music belongs to everyone and that the more local music venues can work together to deliver exciting gigs, the more vibrant the Cambridge music scene will be.

We decided on the tag-line "music with a social conscience", because our team, our gang of six, are all left-leaning music lovers who want to use music, the thing we love, to make a difference to our community. This includes tapping into the protest movement.
Music from the folk and roots tradition is more relevant than ever. We need only think of the situation in Syria and the song "Deportees" to know that music matters and changes how people think and feel and see the world.
Please feel free to contact us if you would like to us to consider you or your band for inclusion in our programming - we can't promise you a gig but we can promise to give any submissions a listening  ear and an open mind.
Tony Phillips  has a track record in supporting community music including Cluzion Music and Greenstage, offering spaces at outdoor events for muscians to play.  You can find him every Thursday evening running the music session at the Plough and Fleece pub in Horningsea.
Our compere Nicky Vere-Compton is known for adding comedy and a sense of fun to Open Stage nights at Cambridge Folk Club where she compered for ten years, also delivering a legendary raffle. Nicky advocates use of music and protest and comedy and laughter to defeat oppression. In her guise as the Party Leader of the UK Pie Party, she takes Pies in the Face, to raise money for the Cambridge Cancer Help Centre.
Dave Clark is our man of mystery. No-one knows what he does, but nothing seems to happen without him.

Jeremy Harmer is immersed in Cambridge music both as a singer-songwriter -  where his songs frequently address contemporary social issues - but also as a viola player in Cambridge and Ely orchestras. He is also a spoken-word performer and has taken music and narration to many different countries around the world. He is a well-known writer and trainer in the field of English as a foreign language.​

​Andy Benson is an old-tyme activist and political miscreant of the Left.  Exhausted by the lotta continua he’s currently taking time out and the opportunity to have a little lie down. Closer to home he was better known as the bass player in local combo Redhouse Radio, where he cheerily plonked along on the back line until the band folded in 2014. Currently dep-ing bass in a London-based rock pop band and accompanying his vocalist partner on six string, he’s still up for new musical collaborations, so get the offers in while you can.... 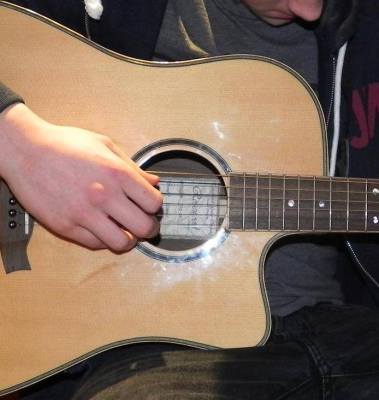 The Cluzion Club was set up by Tony Phillips and Keith Winter in 2004. Cluzion Music aims to create spaces for listening audiences to enjoy the best jazz, blues, world, folk, fusion, acoustic, classical and new music that the region has to offer, currently based at the Plough and Fleece Community Pub in Horningsea, near Cambridge
The pub offers weekly acoustic open sessions every Thursday, two set gigs and the famous annual Greenstage Festival 3 day free festival

The Music Marathon has been held every spring since  2013, with over 24 hours of live music from some of the best acoustic musicians in Cambridge and beyond, including: Na Mara, the Willows, Marina Florance, Inlay, Pat Crilly & Greg Camburn, The Larks, Strangeworld, Tom Conway, Grace Petrie, Two Coats Colder, Robin Gillan and The Cambridge Crofters .
The Music Marathon has raised over £20,000 for local cancer charities.
Les Ray presents this fortnightly show on Cambridge Community Radio 105.
Listen for live sessions, new tracks and classics from the folk archive, along with news of what’s happening on the folk scene in Cambridge.
http://cambridg105.fm/shows/strummmers-and-dreamers/
Previous shows and sessions:
www.mixcloud.com/StrummersandDreamers
Held on 3rd October 2015, the anti-austerity concert was organised by Strummers and included music from Grace Petrie, Reg Meuross, Tony Phillips and Red Velvet.


A second We Shall Overcome concert is planned for Saturday 8 October 2016. Watch this space!